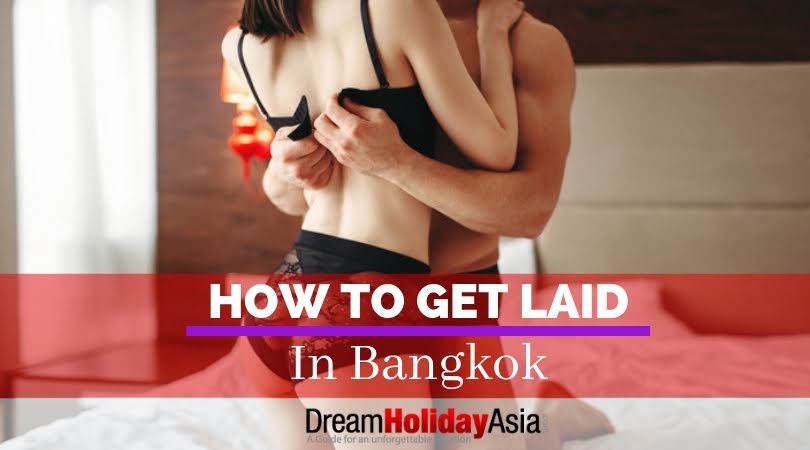 It’s easy to get laid in Bangkok when you visit the red light districts.

Yet, how about having sex with a Thai woman who really does want to have sex with you and doesn’t require you to pay her to have sex?

A woman who wants to have sex with you because she really feels wet for you. Isn’t that why you travel?

There are many ways to get laid in Bangkok without paying for it. But today, I’m going to explain the 3 best ways to have some sex…

1. Go To A Nightclub Where Girls Hook Up

Before I give you some examples of how to interact with Bangkok girls in clubs to make them sexually attracted to you, I just want to point out that most girls out partying usually won’t be alone.

In most cases, women in Bangkok hang out with friends in groups.

The girls you’ll see alone are 99% of times hookers that are looking for customers. Yes, they’ll be smiling at you, but they want your money, not you.

When you want to get laid with genuine women in Bangkok clubs, you need to feel comfortable to go talk to large groups of people and be able to socialize with them.

If you fear rejection, then make sure to stick around for the other two tips that I’m going to give you in this post… I’m going to be talking about ways to meet girls in Bangkok without the need to approach them in public.

For now, let’s see at the first tip: go to a nightclub where girls hook up.

When possible, bring a friend with you to go out partying. Even a girl can do.

If you don’t know anyone in Bangkok yet, just strike a conversation with another guy or guys in the club and ask if you can join them for a drink.

That gives you instant “social proof” in the club.

You don’t look like a lonely soul but a sociable man with friends. In Bangkok, any men that go out alone in a club is been seen as a playboy or worst a “sex tourist”.

So, don’t just have a drink by yourself in the club, have a friendly conversation with someone as soon as possible.

Then, look around for potential hot girls and go to talk to them.

Rather than just go to a table, introducing yourself and stick around how most guys do, have a unique introduction about yourself and go back to your table.

Show some confidence by joking around and without talking to anyone specifically.

If the girl looks at you while you are at your table, that is a sign that she likes you.

When you go back to talk to her this time around, she feels less intimidated by you. So now you can make her feel sexually attracted to you with jokes and by showing confidence.

Girls in Bangkok are very shy, even the hot chicks that seem confident. It’s their Thai way of being feminine.

So, refrain to go in too aggressive or trying to get laid the same night.

Even though is possible and happens from time to time, you better get her phone number and close her the next day when you meet without her friends.

When the friends are around it’s hard to convince her to have sex with you because of social pressure.

If she goes with you, she gets labeled as a slut by her friends.

So, set up a date with her and enjoy some sex together.

2. Get A Girl Hot For Action On Tinder

Tinder is popular in Bangkok and most girls on this app can speak English.

However, Tinder isn’t built around conversations but rather around physical sexual attraction.

Tinder work best for you if you are a young guy between 18-25 years old, good looking and fit.

If you don’t fit into the demographic, no worries, my third tips work for older guys even if they aren’t fit or handsome.

For now, let’s see how to use Tinder to get laid in Bangkok.

So, don’t just upload pictures of you wearing jeans and a t-shirt, rather upload a picture where you show some muscle.

Women in Bangkok are strongly attracted to fit guys, especially white foreigner with a nice body. As in Thailand is consider “rude” to show the body in public, Bangkok girls aren’t used to seeing guys show their flesh apart in the privacy of the room.

Such apps like Tinder have removed this “shyness barrier” and girls really get turn on immediately.

You’ll be surprised to get laid with girls met the first time, after all, Tinder is a hookup apps.

If you are over 25 years or not so attractive, you better…

3. Use a Dating Site

Dating sites are built around communication rather than only physical attraction, so even if you aren’t tall, handsome and young you can still meet Bangkok girls and get laid.

Most girls in Bangkok work long hours and don’t have much time to go out socializing, but like everyone, they feel lonely and want just to connect with someone.

That doesn’t mean they just want to talk, but also have a sexual experience.

That’s why if you want to get laid in Bangkok but you prefer to avoid approaching girls in public because you fear rejection, I recommend meeting Bangkok girls on Thai dating sites.

If you want to get laid, don’t do the mistake of having a nice conversation with women, trying to get to know them, and so on.

That only makes you be seen as a potential provider for a long term relationship.

Instead, be bold by asking to meet up tomorrow or if you are not in Bangkok just yet, focus on making her feeling sexually attracted to you.

The best way is to get on a chat video, talk face to face sort of breaking “the ice” so to get her to feel comfortable with you.

So once you arrive in Bangkok, you are going to get laid the same day you meet up.

When a Bangkok girl accepts to go for a date with you means she is open to the idea to have sex with you.

They know that by accepting to see you, sex is the next natural step, so don’t worry about her being offended or anything like that.

Don’t worry about being Mr. Polite because that doesn’t work.

Mr. Polite don’t get laid but Mr. Confident get the action.

How To Game Bangkok Girls

Okay, those were some 3 ways how you can get laid in Bangkok.

Ho! Don’t forget that women in Bangkok love compliments but don’t be too charming because it might sound exaggerated.

You don’t want to be label as a playboy or something similar.

Women in Bangkok are used to compliments as Thai men are a very charming and sweet talker, but on the other side are known to be cheaters and playboys.

So keep it real and don’t overdo if you don’t want to be seen as one of those Thai men.

Most Bangkok women are open to the idea to get laid with a foreigner because are seen as more trustworthy than their countrymen, so keep up with that image.

She’s going to be happy to know that you are a gentleman and you’re not just playing around with any girls, but you want just her.

You’ve let her know that she has stood out from the crowd, but you’re not going overboard with it.

That way she feels pressure to give it to you so to keep you attracted to her. She wants to get kissed by you, have sex with you, and have a great time together.