If you’re looking for easy sex in Pattaya, don’t look further than Soi 6. It might only be a few hundred meters long, but this street is more than 50 bars and 1.000 naughty girls.

It isn’t only the quantity of girls that attract visitors, but their horniness and cheap price. You can get laid with $40 dollars.

Ago-go and beer bars need no introduction, but the short-time bar format is less common.

Short-time bars are just that – a bar you go to for a drink and to take the girl for a short-time experience. 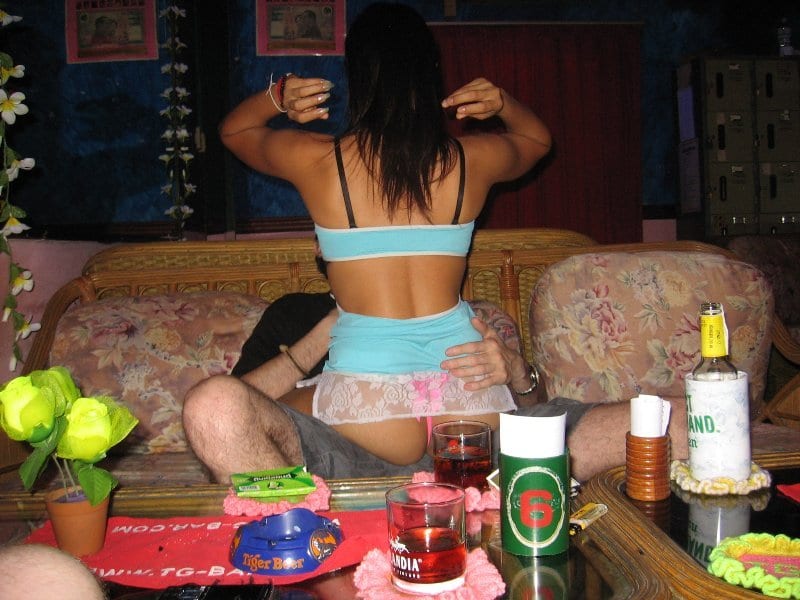 In the Pattaya’s short-time bars of Soi 6, girls typically sit outside in sexy, skimpy apparel showing plenty of flesh and call out to any and every guy passing by.

Competition is fierce with bars offering the same services at the same prices lined up next to each other.

If you decide to enter a bar, you should choose a girl before passing through the curtain and into the often dark bar area.

A drink for you and one for her and she will cut through the BS and do everything in her power to convince you to take her upstairs.

There’s no pretension about what’s on offer and not even a hint of the girlfriend experience.

What Soi 6 offers is cheap, readily available sex, much as I expect prostitution is like in the West.

You walk into a venue, order a drink, choose a Pattaya Soi 6 girl, go upstairs and do the business.

The short-time bars open for business late morning but things don’t really get going on Soi 6 until around 3 pm or later and peak late afternoon around 7 pm.

Some bars put their girls in uniform and on the right day you might see a bunch of sexy Soi 6 Pattaya’s girls wearing nurses’ uniforms or other sexy themes.

In addition to their uniforms, one of the hallmarks of Soi 6 is the way many girls go totally over the top with makeup.

Garish eyeshadow in pastel pinks, blues and greens seem to be a feature of the infamous Pattaya’s Soi.

Soi 6 is a favorite for many Pattaya-based Westerners, but I often wonder what all the fuss is about.

I mean, nowadays there are so many ways to find Pattaya girls for sex… Why get crazy about this little street?

The Most Infamous Brothel Street in Pattaya

My memories of Pattaya’s Soi 6 in the past is of walking past bars with a line up of dreadfully ugly girls, many heavily tattooed and some who could have done with dropping 20 kg or more.

It was quite possible to walk up and down Soi 6 and not see one girl you even remotely fancied and making it worse, many seemed desperate.

It would be a thrill to walk along and have dozens of girls screaming at you, pleading for you to choose them, but is that really that great when they don’t look too flash?!

But things have changed somewhat and in fairness to the best Pattaya Soi, it is one of the few bar areas which seems to have improved in recent years.

While there are still plenty of ugly girls to be found, it seems to have shirked the industry trend of girls getting bigger and bigger.

Dare I say it, on my last stroll along Soi 6, I thought some of the girls were quite pretty…

The prices on Pattaya’s Soi 6, which is also known as Soi Yodsak, used to be a street-standard 200 – 300 baht barfine, which covered a short-time barfine and the use of a grotty room above the bar.

Then there was the girl’s fee which was typically 500 baht. Throw in a drink each and a tip and all in you’d be up for around 1,000 baht.

Prices are said to have moved a bit with 300 baht being the standard barfine / room fee and 700 baht most girls’ expected compensation.

In what I find to be a curious development, Pattaya Soi 6 has become a hunting ground for gogo bar owners who trawl the soi often, keen to recruit new girls.

Those who made several trips a day upstairs could make 5,000 baht upwards a day, a figure few Pattaya Agogo girls reach.

But there’s a stigma with Pattaya Soi 6, even among the girls, and there is a certain pride in being offered a position in Agogo bar, which says to the world that “I have got a hot enough body to get out of this environment and join the crème de la crème of Pattaya bars”.

The soi 6 bars are little more than brothels – and the girls know it.

In some ways, Soi 6 reminds me a little of Soi Cowboy with some girls living on site in the rooms above the bars.

Apparently, this was more common in the past than it is now and more girls live outside, the same as it is at Soi Cowboy.

Not everyone likes Soi 6. I’m ambivalent about it, as much as anything because I don’t partake.

Hardcore Pattaya sex expat residents love it whereas those who are picky about the girls tend to prefer the gogos.

A Pattaya media mogul once said to me that Pattaya Soi 6 is the one part of Pattaya he really doesn’t like and would rather it didn’t exist.

I have to admit a degree of surprise that it still operates as it does, with girls frequently yelling out all sorts of interesting phrases in English to passers-by, often gesticulating and sometimes even flashing them.

Like everywhere it faces crackdowns from time to time but things always return to normal quickly.

The sort of ambling up and down soi 6 with a camera or video camera that is the norm on Walking Street won’t win you any friends on Soi 6.

Comparisons between Soi 6 and the Coconut Bar are inevitable. You’d have to say that liaisons in soi 6 would be safer and the chances of being ripped off are remote.

In fact, at least one bar on Soi 6 used this as part of their promotion using the slogan “get laid without getting scammed!”.

The girls found on Soi 6 are for the most part more attractive than those loitering on Beach Road.

It is more expensive but at a thousand or so baht all in, it’s hardly going to break the bank.

Given that everything takes place on the premises, a better comparison may be with the Pattaya massage parlor experience.

You can get cheaper beer elsewhere and if you’re down to your last few baht, you can always find a cheaper bonk on the beach.

But for the combination of the laid-back atmosphere of the Pattaya of old and a relatively stress-free experience without tourists gawking at your every move, Soi 6 remains a favorite afternoon spot for many Pattaya locals.

If you aren’t into hardcore prostitution and prefer to stay away from the possibility to get some STD, you might prefer to meet Pattaya girls online.

Pattaya’s Soi 6 offers a purer form of prostitution than what you find in other Westerner-oriented nightlife areas.

I noticed that customers in Soi 6 brothels seem to want to know the girl’s life story while hoping that she would turn girlfriend material.

I feel sorry for them, but they are in the wrong place.

Whereas other areas are about fun, entertainment and the girlfriend experience, this Soi is simply about sex.

So if you’re planning to visit this infamous area, don’t expect romance or understanding but just a juicy pussy in your face.