If you are wondering where the best places to meet singles in Bandung are and how to date local girls, this guide will point you in the right direction.

I’m going to show you how to pick up single girls in Bandung plus tips to get you laid – fast!

First thing first, meaning we start with Bandung nightlife covering nightclubs and pick up bars. Then, I’ll cover the best spots to day game and an overview of online dating.

And last but not the least important, tips on how to make your hunting and dating experience with Bandung girls a success.

A great way to start the night is in one of Bandung’s pick up bars where you can get a drink and also a chance to hook up with the many girls out at night.

Bandung nightlife is different from that of Jakarta because it’s more laid back and less flashy.

Most bars and nightclubs are usually party spots for many students from the university in the city. That doesn’t mean you won’t find clubs with mature women.

Then, up in the hills at Dago Atas and Sersan Bajuri is a more reserved and upscale nightlife scene with luxury clubs and exquisite dining spots. Perfect if you are looking for mature and independent Bandung women, but also girls on holiday.

Generally, girls clubbing in Bandung are more conservative compared to their Jakarta counterparts and won’t party as hard as they do.

Having said that, it doesn’t make the nightlife any less fun and you can get “lucky” if you pick the right girls.

Best Clubs And Bars To Pick Up Girls In Bandung

The nightlife in Bandung starts as early as 8 pm in the bars.

In the evening you are most luckily to meet students and women with office jobs, especially on Wednesday when is ladies night. 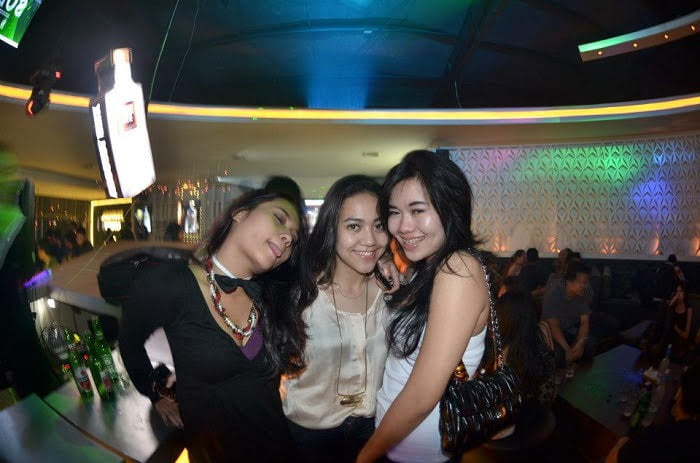 Instead, late at night, most girls are prostitutes or party girls who are looking for extra cash. Yes, paid sex in Bandung is alive and kicking, and not only available in the red light districts.

If you don’t like the idea to be surrounded by hookers, on weekends is your best bet to meet non-working girls when women in Bandung go out with friends to chill out.

The best places where to pick up girls are:

It’s the best student bar in Bandung. Great place to start the night with lots of young campus girls around. You have a better pick up chances if you visit with a wingman.

The club has an underground-like setting and is one of the most popular clubs in the city. Though there is a majority of guys (largely Indonesian) and most girls are in groups.

It’s a classy and trendy bar with a more posh crowd of guys wearing tux and girls in evening gowns. The crowd here is largely Indo-Chinese, so there are lots of classy girls to meet here.

The club attracts a great crowd to its spacious dance floor to enjoy good music and beats. There are lots of Ayam girls and students to hook with here.

The club is busy on the weekends. The girls are on their 30s with a mixed crowd of freelancers and normal girls.

It’s a cozy bar with a retro design and is located on the hills of Dago. There are lots of tourists, expats and high-class locals here.

It has a large dance floor and an underground vibe buzzing with house music. Easy to pick students, foreigners and independent women.

How To Meet Women During The Day

Despite being a city in a Muslim country, you can manage to pick up girls in public during the day, but it isn’t going to be easy.

First, most girls in Bandung don’t speak good English enough to keep a conversation going, making them even shyer then what they usually are.

When a foreigner approaches, they can get intimidated because they feel a strong attraction from overseeing men. Most of the time they go in panic mode resulting in freezing making them unable to talk to you.

Most guys interpret that as the girls are stuck up but in reality, they are panicking. It’s a real struggle to pick up women during the day.

This doesn’t mean you should not even try to approach women in Bandung. But don’t have high expectations to turn a conversation into a date. especially with Muslim girls.

That said, the malls are the best places where you can hook up with hot girls during the day. The most popular one is Paris Van Java, where students and mature women hang around till late at night.

Other decent malls to meet women in Bandung are:

The nightlife in the city is quite good, but some foreigners just coming into the city might find it hard to hook up with girls as they go out in groups.

As said earlier, they also tend to go in panic mode when approached in public by a foreigner. Day game can be a real struggle even to pull a phone number from the girls, let alone to be able to date one.

Communication isn’t helping either, most Bandung girls have a hard time to speak English. They feel more relaxed to know you by chatting with text messages, that way they have the time to understand what you are saying.

When you start a conversation with a Bandung girl online, things can develop naturally and at their peace which result in more dates and sex.

So, the best way to roll in Bandung if you want to hook up with girls is by using a popular Indonesian dating site.

Online dating is where you can build a long list of dates and not to worry about girls being shy or not able to communicate with you.

Plus, you can secure hook-ups even before you arrive in the city. That way you can make sure not to land empty-handed.

Keep things simple, enjoy talking to them as you do with your friends, Bandung girls are naturally attracted to foreign men thanks to the “rock star effect”. You look exotic to them as much as they look to you.

So, you don’t need to play games or trying hard to get a date, within days they will ask you out. The best way is to go for a coffee or meal near your place, and then invite them to your place for a movie.

Tips For Single Guys In Bandung

Now that you have all the info you need to meet singles in Bandung, I’m going to share a few tips to ease your way in getting laid.

The best romantic spots for setting up dates can be found in the uphill areas like Dago Atas and Sersan Bajuri.

However, it’s not the cheapest area to be either. Up there, you’ll find lots of exquisite restaurants, bars, hotels and lounges where you can take Bandung babes out on dates, if they don’t mind to meet you in public areas.

By the way, the uphills are also a great hunting area to find high-class Bandung women. If you prefer a younger crowd, Jalan Braga is the hub of nightlife in Bandung for singles, but watch out for hookers.

It has the highest number of bars, nightclubs, and KTVs making it a perfect place to pay for sex in Bandung.

Keep in mind that there are Indonesian girls so conservative that remain virgins until marriage or at least until a serious relationship. Don’t be surprised to find girls hesitant to go to your place, they might like you but they never had sex before so they are scared.

So, you better ask if they had a previous relationship to avoid wasting time with virgins.

The best area where to stay is Paris Van Java or in one of the hotels on Jalan Cihampelas. Easy access to Bandung nightlife and campus girls.

In general, the city is good for a single guy either is looking for a night stand or a serious relationship.

Even though the girls in Bandung are religious and conservative, you should not face any serious problems to hook up with them.

If for any reasons, you can’t make it happen, at least the city is a great destination to visit.

When you’re in a city that you would enjoy visiting no matter what, you are likely to be in a better mood, and that better mood will translate into you doing better with women.

You definitely are going to get attention from girls on the street in Bandung as foreigners are rare there, but I would say too rare.

In fact, most girls have never even considered the possibility of dating one, so most are very shy.

Trying to hook up with girls at night is easier than play them during the day, but the easiest way to go is by using this dating site.

I hope you have found this Bandung dating guide useful and feel more comfortable to meet women in Bandung.

Do you want to travel and meet local girls? But you don't know where to start. Use my travel resources with the best companies out there...Learn More