What western man never want to concede is that they all seem to be drawing water from the same tainted well, which is why they disproportionately get the unsavory stuff.

To put it bluntly, there is a huge difference between a “typical Thai woman” and “Thai women who date Western men.”

This is going to be harsh, but it explains why so many farangs seem to get the short end of the stick with so many Thai women.

A Real Story By US-Thai Man

The Inside of Thai Culture Revealed

Just a little about my friend who opens my eyes to the Thai world. He is a Thai born in the USA, but raised in both the US and Thailand. He is fluent in Thai but actually prefer English as he believes it to be his native language. He is now here in Thailand to stay.

He has MANY farang colleagues and friends. I must say that most of the closest friends, here and back in the states, are white men, so I’m certainly not going to bash farangs here mindlessly.

But believe me when I tell you that Thais will share with me stuff that they’ll NEVER share with a western man, not even if they’re married to one.

And I’ll say this: “most of the farangs in Thailand really don’t get it”

They really don’t see how things are, how they’re perceived by the average Thai, men and women.

What Thais talk about when farangs aren’t around, why Thai people “smile” a lot, etc.

All they know is what their Thai wife or GF or their small circle of friends and relatives have told them, which is of course usually completely biased and distorted.

But on rare occasions, I’ll read something from a white man and I’ll say to myself; “man, this dude gets it.”

They’ll say they like short, dark-skinned girls with a 6-year school education but perhaps the truth lies in the fact that Isaan women often throw themselves at the first farang that comes anywhere near them.

I’ll go a step further and quote the words of an American comedian who once said something to the effect that “the woman that most men get are frankly the best that they could do with the options available.” More on this later.

Farangs need to understand Thai’s belief and culture in class distinction to appreciate the importance of number 2.

And before you go about beating up Thais for falsely believing number 2, understand that Thais know what’s going on in Pattaya, Phuket, and the seedier areas of Bangkok.

They see farang guys trying to pass their hookers off as girlfriends and they know. Heck, everyone knows. So if you want to blame anyone, blame these true whore-chasers who are still out there every single day.

It never ceases to amaze me how Western men get upset when Thai folks mistakenly assume their wives/GFs are hookers, yet see for themselves other farangs with hookers and don’t even bat an eye.

Thais only believe that Thai women with white men are BGs/ex-BGs because it’s true the majority of the time.

Back to the topic. So Thai women believe that farangs are wealthy.

What kind of women will this attract?

Well, certainly women who are into money.

I’ll say that most women consider this to be desirable, but only a few believe it to be the most important thing.

The ones who have it on the top of their priority list will certainly be after guys that have it. But then there’s the number 2 rep that farangs carry around, the whore-chasing thing.

Most Thai girls culturally are conservative by nature and don’t want to be seen as “that sort of woman.”

So that takes out the “nice” girls. And the women that are educated and well-off – well they don’t need that stigma either.

I mean, why be looked at as some low-class gold-digger when you’ve already got your own money?

So what you’re left with are the poor desperate types who aren’t concerned about their reputation or what other people think because quite frankly, they have much more pressing problems.

So what I’m saying is that farangs have got the typical Thai women (most of the time from Isaan) pegged all wrong, yet they’re probably right about the Thai women that they’ve been with.

And this is because most of the Thai women that farangs end up with are not ordinary Thai women.

But seriously, what else are these women going to tell you?

That they’d rather be with a Thai guy, but are with the farang for financial reasons? I’m sure that will go over well with most farangs.

The truth is probably that many of these women have had some bad experiences with Thai guys and although they’d still prefer a decent Thai guy, he’s probably out of reach.

And the clock is ticking for her and her family. So why is this “decent Thai guy” so out of reach for these “Isaan” type women?

The “Unspoken” Secret By Thais

There’s a well-kept secret in Thailand that every Thai person seems to know but no farang does (or maybe can’t grasp what it means).

It boggles my mind actually because you can’t get three Thai people to agree on anything but nearly everyone agrees on this, both men and women.

Now, this is where there’s a huge perception difference between Thai and white men.

Let me try to explain it so that the average Western man can relate; Thais look at dark-skinned women sort of the same way that Americans look at fat white women. 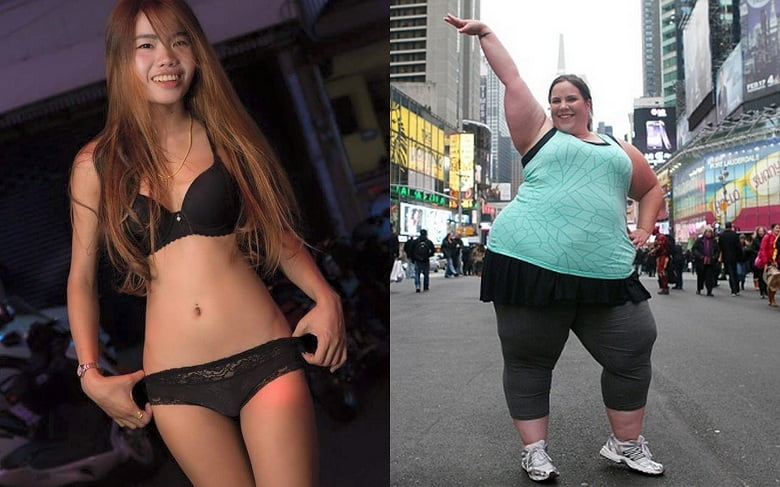 You, Farang.
When you walk around the street of Thailand with your cute Thai girl from Isaan (see her on the left side of this picture), every Thai man will see your sweetheart as you see the woman on the right side of the picture.
In conclusion, what looks and feel good for you, in other culture might be the opposite. Keep walking.

Most Western guys don’t dream of waking up every morning next to an obese woman, but admittedly, some guys are into that sort of thing. And if you are, you’ve got the pick of the litter.

And that’s how it is with Isaan type women. Thai men of reasonable means are not going to be interested in these type of women, and these women know it.

Don’t believe me? Heck, just watch some Thai TV and see what they’re touting in the commercials.

Constantly seeing products that are alleged to lighten women’s skin.

Certainly, doesn’t fit the profile of a girl typically seen with a farang. Now I honestly don’t believe that farangs “prefer” these Isaan type of women, although most seem content with anyone who’s thin and young, regardless of what they look like. But that’s really all that’s available to most white men.

Something interesting that I’ve noticed is that it’s almost pointless to be a good-looking white guy in Thailand.

Because you’re going to have access to the same pool of women as that fat, hairy, smelly, 55-year-old German guy sitting at the end of the bar.

Both of these two “sexy men” have access to same pool of Thai women. Dark skin and from a modest background.

You’re not going to have access to the same type of women that I have – and I say this almost apologetically.

Back in the states, you see a good looking guy and you expect him to be with an attractive woman. And he almost always is.

But here, you see a good-looking farang guy, and the chances are that his GF/wife will be the same Isaan-type woman that all the other farang guys run around with.

There’s a young farang guy in my company who’s got the classic GQ look.

I mean this guy would be a serious ladies man back in the states. Nice guy too.

Yet, his girlfriend is just oh-so-typical Isaan-type. And another guy, not as GQ, but in his late 20’s, better than average looking, making solid money, and his new wife has two kids (not his), and of course… well, no need to beat a dead horse.

Nothing wrong with this, by the way, if they’re happy. Just an observation.

Which brings me back to the “secret” thing. It’s not really the intention of Thais to deceive farangs here or keep him from the truth.

But there’s no way to tell the guys and honestly, why would we want to?

If the woman is attractive to you (and a good person to boot), it shouldn’t matter what everyone else thinks (ever seen the American movie Shallow Hal?).

I’ve run into many situations where my farang colleagues or friends would show me a picture of their new GF, just gushing with their new found love expecting me to shower him with the compliments of what a goddess she was.

Believe me, these gals were almost always hideous, but I just usually nod in agreement.

Looking for Love in Thailand? Watch Out! 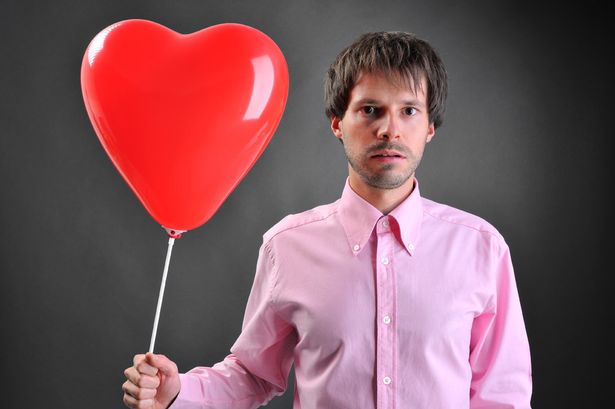 My advice to Western men who are still searching for love: if a Thai woman comes after you, watch out.

As I said before, Thai women are conservative by nature. This is how a “nice” Thai girl approaches a guy she’s interested in.

Has happened to me countless times. Her friend or acquaintance will contact me and say that someone is interested and see if I’m available.

I’ll ask some questions, and the friend will never reveal who it is until he/she knows that it’s a green light. I always end up saying I have a girlfriend (which I do) and I’ll never find out who this girl is.

But if she approaches me directly, it will be very subtle, and it won’t even appear like she’s interested.

If a Thai woman drops these subtle hints and the guy doesn’t get it (or isn’t interested), she won’t pursue you for long. If you are going to date a good Thai girl you better follow certain rules.

The point here is that they are very conservative when it comes to courtship and the man has to be the aggressor.

If the woman is the aggressor, then she’s not the type of woman that I’d be interested in.

Women libbers in the states are going to hate this, but that’s still the way it is in Thailand.

Something else: if she says that she really likes farang guys and that’s what she’s looking for, don’t just walk away – freaking run!!!! Because what she’s essentially saying is that she wants a farang guy and ANY farang will do. You’re nothing special, just the target of opportunity.

And why do you think she prefers a farang guy? Hint: it’s got nothing to do with your charm and personality (check number 1 above).

Why would you want to be with a woman who’d basically take up with any other farang guy if given the opportunity? What you want is a Thai woman who’s not interested in a white man.

Actually, prefers a Thai guy. You win over that sort of woman, and you’ve got something.

Then you’ll know that she’s interested in you for you and nothing else.

But it’d help if you took the time to learn some Thai. I’d be a little suspicious of an uneducated Thai woman who speaks English a little too well, but that’s another topic for another time.

What are your thoughts? Do you want to date Thai women after reading this? Any personal experience to share?

Click the “new entry” button below and express yourself.