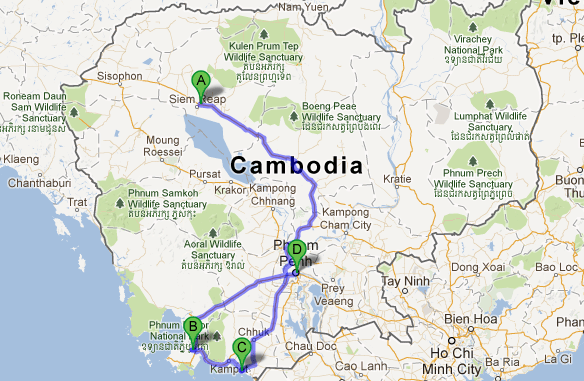 I had been reading about the sex stories in Cambodia here and on other sites, so I decided to visit Cambodia to see for myself.

I was surprised to learn that most of the stories about Cambodia were contrary to my opinion. But then again, things change.

Koh Kong: Many people who wrote about this town near the border of Thailand said it was a paradise for men.

Well, I enjoyed this quiet little town very much, but it was far from a paradise for men as far as girls go, but maybe it was at one time.

The town had past a law to keep the brothels out of the city limits. This new law was initiated to stop all the farangs from hitting on the non-working females in the town.

The Chicken Farm only had about 5 or 6 brothels on each side of the red dirt road.

The Vietnam girls were all overweight with bulging stomachs and their faces looked very withdrawn.

Couple this with the white powder they wear on their face to keep away the mosquitoes and the bright red lipstick, I found the Vietnamese girls to be quit ugly and not appealing at all.

I first went to the Chicken Farm in Ko Kong in the daytime, in the early afternoon. The girls ugliness was a turnoff. In the night time, they used red neon lights.

This is because everyone looks beautiful, including you and me, under red lights.

Red lights are used in almost every bar and disco in the world. It is known all over the world how great people look under red lights. So in Cambodia, the red lights were necessary.

The Cambodia girls, however, were beautiful, but you won’t find many of them actually available. The Cambodian brothel businesses in Ko Kong are mostly populated with ugly Vietnamese.

I walked up and down the short red dirt road to check out all the girls and I was impressed with the only two Cambodia girls that were available.

I took one of them for a short time [$5.00] and it was most enjoyable except for the blow job which is referred to in Cambodia as Yum Yum.

The Cambodia girls try to avoid Yum Yum as much as possible even though they will say that they will do it. This method is just a way to get you to accept them until they get you inside their room.

If you ask them beforehand if they like doing Yum Yum and they hesitate slightly to answer, that is the key to knowing that they don’t like it.

However, once you are in their small bedroom, they’ll do their best to talk you out of it. You’ll find it difficult to get them to Yum Yum(Blow Job). It is the same with the Vietnamese girls.

Usually, only the far less attractive Vietnam girls are able to give good Yum Yum. You must ask the Mamasan who gives good Yum Yum and she will tell you.

Yum Yum in Cambodia is like polishing a pair of shoes. After you have taken a shower, the girl will take a cloth and wipe your dick about ten times before she enters it in her mouth.

After about 5 seconds, she will take it out and begin polishing it again to try to clean up any pre-ejaculation that might have occurred. She might even spit on a towel to clean her mouth.

This process repeated itself over and over again until I could bear it anymore.

So again, any hesitation when asked to Yum Yum will certainly lead to this.

The red dirt road is sort of an upside-down shaped U. The brothels are about one hundred feet apart from one another.

If you rent a motorbike for $3.00 a day, you can cruise through it fairly easily.

Most of the girls can usually be seen at night when the red neon lights are lit to cover their ugliness, or should I say noticeable impurities. There can be anywhere between 500 to 1000 girls available on this long road.

The first parts of the road are mostly Cambodia girls which then lead on to the Vietnam girls. I found most of these girls to be unattractive, overweight and very much used.

I sat at a table drinking a beer for a few hours and watched the traffic go up and down the road and I only have seen Cambodia men and boys cruising the road. Never did I ever see any farangs at the Chicken Farm while I was there.

I managed to find one young (19 yr old) pretty Vietnamese girl and decided to take her back to my hotel for $15.00 for the entire evening.

She swore that she gave good Yum Yum when asked, but she refused to do it at my guesthouse which was very far away. I had to drive her all the way back for a refund, but the Mamasan refused to give me back my money.

The Mamasan asked me to pick another girl instead without charge, but the other girls were very unappealing to me.

Finally, the Mamasan offered to give me only $7.50 back, which I accepted. So try to avoid paying up front for services or maybe only put two thirds down which I eventually did at another place.

You will find it very difficult to find any Cambodian in Sihanoukville who can speak English.

In Ko Kong, you will find many moto drivers who can speak English, but in Sihanoukville, there are only a few. If you get lost driving around or need to ask for directions you’ll be out of luck. At night, you can be a target for theft.

Two Khmer girls riding a bike in the centre of Phnom Penh. If you plan to visit Phnom Penh for a sex holiday, make sure to be prepared for the wild west of Asia.

Sex in Phnom Penh: This was a very interesting city to me. The traffic reminded me of Bangkok, without any order, but I was surprised how well it all moved about and worked.

It was a refreshing experience to see that Freedom does work without the need of traffic cops and their corrupt big business system of courts. I went to a neighborhood outdoor place to eat and everyone stared at me without a smile. I was with my moto driver and the looks made me feel very uncomfortable.

Sharkey’s: I heard over the internet how great Sharkey’s Pub was and how the girls were less aggressive. Actually, my experience was the opposite of what I had read.

The Vietnamese girls were very aggressive and very used and ugly. I was told by a local that Sharkey’s used to have a Mamasan that had a crew of thirty or so girls who worked for her, but this Mamasan is no longer there.

Thus, Sharkey’s is now a freelance bar and the girls are the worst of PP.

I was very disappointed in Sharkey’s. It reminded me of an overpriced sports bar in the west. I stayed for two hours and left extremely disappointed with the atmosphere and the girls available.

Martini’s:  To my surprise, and no one ever mentioned it on the net, Martini’s is a gay bar and disco.

All the girls were lesbians accompanied by there Tom’s, and the Cambodian men were also gay. Most of the girls in this bar must have a lot of drug user, because you can see it in their withdrawn faces.

I have seen a lot of Tom’s on the dance floor slugging it out with their Dee’s, but only in a jokingly way. It made me feel very uncomfortable to see a Tom grab her Dee by the throat and smack them around. But as I watched, they eventually began laughing and playing with one another like this.

The Cambodia men (faggots) were doing the same thing. They were smacking and pushing each other around with great force. Very bizarre!

The music was terrible. The DJ could not mix any songs from one to the other. He sort of faded in and out from one song to another, and none of the songs matched.

I found it quite awful to listen to and enjoy. I didn’t find, however, the girls being as aggressive as they were at Sharkey’s. This was contrary to what I had read on the net, but Cambodia circumstances can change very quickly.

My Thought About Cambodia

It didn’t take me long to realize that the girls that freelance around Phnom Penh are apart of the same crew; all lesbians and Tom’s out to get some money from a farang.

Very similar to BKK! They will move about from one venue to the next.

You will see the same girls at Sharkey’s and later at Martini’s or earlier at the Walkabout Hotel Bar.

I am surprised that so many farangs have no inclination about the lesbian scene that has been growing around the world and exists in the prostitution ring everywhere, especially notable in Asia.

There is definitely, at least as far as I’m concerned, a difference between a lesbian, and a girl that only likes men. When you get them in your room, the difference is quit clear in performance, willingness, attitude, and sometimes, truth.

The lesbian will try to do less, leave early, give you excuses, try to renegotiate in your room, tell you not to do this or to touch that, try to rob you, and every word will be a lie.

The same exists in Thailand and every other place in the world. I try to personally investigate before I buy.

I ask questions in a friendly inquisitive way about who they live with, who are their friends, and I try to be as specific as possible about what they are willing to do, how much, and how long they will stay.

This way when I get them in my room, I know what to expect and how to handle an unfortunate situation that will arrive. It’s all a game so you better learn the rules.

Now that the 15 to 19-year-olds are fazed out of the business, we are only left with the hardcore girls waiting for you to enter their playing field.