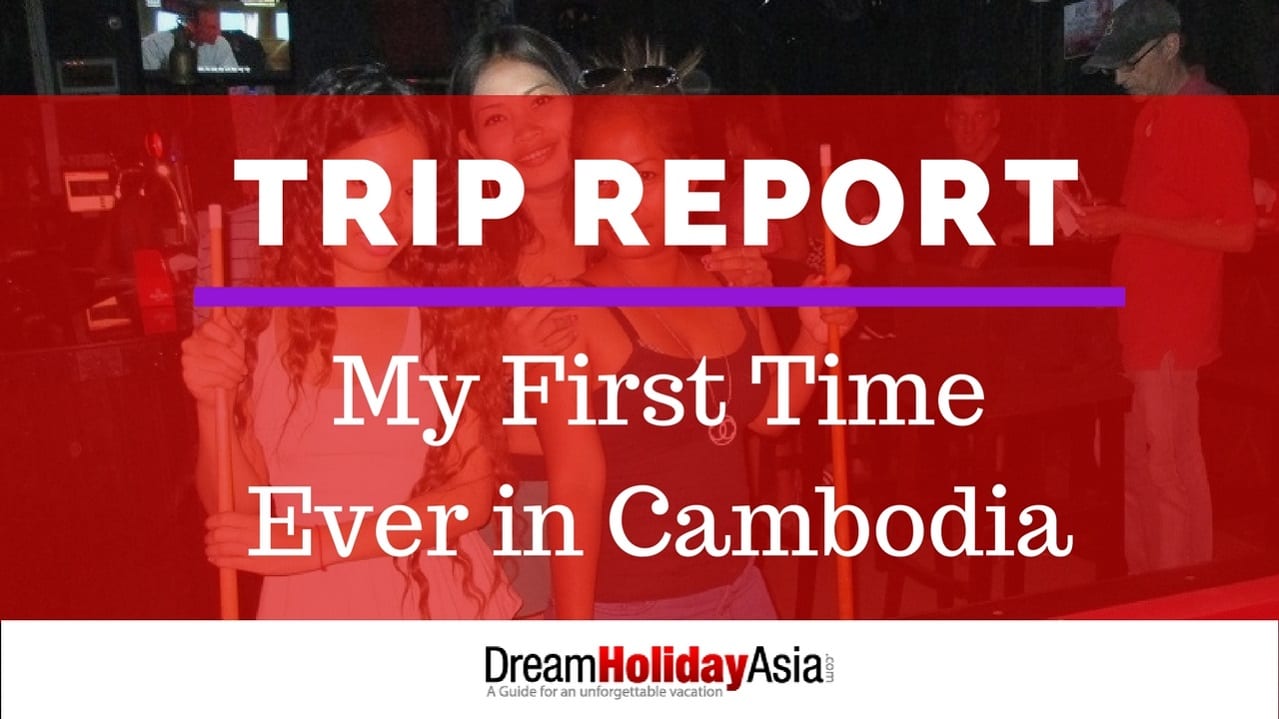 My dad knew someone in an organization that helped teachers teach teachers, if that makes any sense.

I live in Brooklyn, NY and have traveled but just for spring break like trips. Nothing even close to something like this but since he was paying and it was only 2 weeks I was like fuck it! I will go. I was also more comfortable because the woman in charge of the program was someone that my dad knew.

Before leaving I researched places to go, things to do in Phnom Penh and I found places like “Rock” which is catered to upscale Khmers. I am usually good with researching but anything with bar girls or whatever I just dismissed. Boys, I was wrong!

So we land and get a car to the hotel and I meet another guy who is also with the program and immediately I gravitate towards him. I said we should check out this place called “Rock” so we go later that night. It’s really boring and thinking wtf are we doing here.

The guy suggests we check out a placed called “Riverhouse Lounge”. It turns out he was here a few days before we landed and said it was good. At this point I was like yes! Let’s go. Anything will be better than this shit. Once we get there my eyes grow bigger. Women everywhere… Now mind you, this was like 4 years ago. Last year this place was nothing like it was when I first went. Or maybe I have more experience and moved on to better hunting grounds?

The night was turning UP

I just dancing, drinking and observing my surroundings and this girl walked next to us. The girl in the picture here. We start dancing, talking. Remember this is my first experience and I wasn’t aware of all the basic questions.  Where are you from, what do you do, yada yada yada. I forget now how it went down but I might have asked her what she is doing after this… Or she might have asked if I wanted to spend more time together… She then brings up price, which looking back on it hasn’t happened since… I can’t recall any girl and I discussing price before hand, which I think makes sense..but many of the freelancers do not..

Anyway she says 100 dollars!! I was like no, I don’t think so I have 40 dollars. She says YES!  Right away yes…no question. So we dance and drink more then she takes me to a place called “Pontoon” which was on a boat. Now if anyone is familiar with Phnom Penh you know that Pontoon is no longer on a boat so u know this is an old story.

I was drunk trying to keep my bearings. We take a tuk-tuk w/ another friend of hers and arrive at “Pontoon”. We had to walk up this rickety plank and end up on a boat… people everywhere…  a lot of Corny looking guys and cute girls.

Finally we leave and go back to my hotel. It’s late like 3am or so… and the guy says he cannot let her in!!! I was like wtf?? He says she needs ID to enter and it’s for your own safety. I go to my room, because I also brought Viagra… (Not realizing how cheap it is in Cambodia! Another plus)….  I then offer the young guy telling me know that I will give him 20 dollars to just turn the other cheek and he still says no, sorry.

He said it in a nice way. I mean you can tell he was just doing his job and I am not one to get into an argument/fight.  I walk back out into the tuk tuk with the girl and explain everything. She then says she knows of a hotel we can go to… for “short time”. (the reason the hotel wouldn’t let me bring a girl is that she had no ID and it was a business hotel. I could not change hotels as it was already paid for and I was with a group of teachers who were volunteering. I did think about it, but it would not look right especially since my father knew the person who was in charge of everything.  I did not mind going to the short time place).

By the way the tuk tuk driver seems cool… I guess I am new to this whole shit so everyone seems cool at this point.

We go up to the room and she jumps in the shower. I took the Viagra beforehand but I didn’t even need it considering I already took the E pill awhile back. She gets out of the shower with a towel around her and water dripping down from her hair onto her skin. She is looking sexy as fuck. We get into bed kiss and I immediately start eating her out. Then I stop and lick and kiss her body but then go back to eating her pussy. She puts her legs up so I can go deeper. I am down there for a while.. I try spelling my name with my tongue just to keep busy. At some point I feel an extra gush… Not a lot but enough that makes me think she had an orgasm. Then I start fucking more for a while, then she on top.

We leave and the tuk tuk driver is still down stairs!   He drops me at my hotel and I give the girl my hotel number and write down my name.  We kiss and say goodbye but not for long.

I run into her the next fucking night!!!!

So my next night. I was thinking where to go and It was obvious. Let me go back to the scene of the crime! I went to Riverhouse again and was chatting up this brown skinned girl. She was really cute but I loved the way she danced. She moved really well. In NYC, the way you move and dance is “a thing”. Like when a Peacock shows its feathers. Sometimes you can tell where a person is from by the way they dance but this girl was dancing almost like she was from NYC.

Anyway, it was a turn on for me and we were dancing and talking. We were sitting out on the deck of Riverhouse Lounge and she even threw a dollar to the kids dancing for money downstairs. I saw that as a humane gesture considering how poor these people are. I suppose there is always someone in a worse position then yourself.  We were having fun but then I realized how drunk she was. She kept saying “I can’t boom boom, I am too drunk”.

She wasn’t lying, she was too drunk but I didn’t care. I was happy having conversations with her but she wouldn’t stop with it. “I am drunk and I can’t boom boom” so I asked her if she wanted to get some food. All of a sudden I get a friendly slap on the back of my head so I turn around and guess who it is?

It’s the girl that I was with the night before!! I was like YES!!! So I gave the drunken girl like 5 dollars and said she should go get something to eat.

All I was thinking was “round 2 baby”!!!!  The drunk girl leaves and now I buy “P” a drink. I didn’t give her a name but let’s go with “P”.  I was happy to see her as she called my hotel room a few times but I missed her call.  In my head I knew that we couldn’t go back to my hotel so since we went the night before to the “short time” place that was where we were heading.

It was a similar routine. She went to shower and came out the bathroom sexy as fuck! I couldn’t wait to go down on her. I guess that’s a thing with me.  I am obviously not thinking this whole thing thru but was having a blast. Again I am eating her out till I feel that same rush and extra wetness that I got the first time.  Yes, it happened again!!

I am thinking you can fake liking someone, you can fake a smile and even fake an orgasm but you cannot fake that rush I felt when eating her out. She can’t control her body that much. Damn, I think I am getting a hard on talking about this. I haven’t really thought this out in a long time, especially since this was the first time I was in Cambodia.

Again, I couldn’t finish but I was satisfied! Maybe it was the newness of it all or just ignorance? I was happy enough that I knew she had an orgasm. I looked in my wallet and only had 25 dollars. I apologized and let her know what I had and it wasn’t a problem. This was before I realized a short time is usually like 20 -25 dollars.

We would hang out for the rest of my 2 week trip to Phnom Penh. She took me to restaurants and bars. When I say this she took me physically as I paid for it but it wasn’t that much and it was almost like a tour guide that would fuck me. Ha. She even introduced me to another guy who just happened to be with one of her friends.  This guy lived in Phnom Penh and was American like but a pro. We exchanged emails and became pretty good friends.

I only had 2 weeks in Cambodia as my first experience and this was like 5 years ago but that was my intro to Southeast Asia.  I look back I can’t thanks my father enough as he is the one who paid for this whole trip. I think he figured it would be a good experience and maybe change me?  It definitely changed me but not for all the reasons he expected.