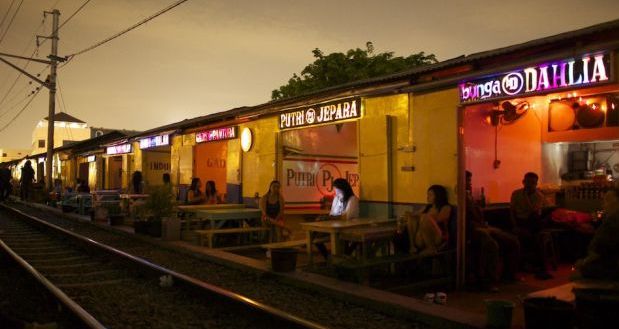 As I dropped off the bus in Sosrowijayan district, on Malioboro st. – I was immediately friends with this local guy who said he’s a ‘walker’ – lol.

As you know, this is the ‘backpacker’ area of Yogyakarta and also the red light district.

Guess what – not on Ramadan it isn’t.

This local guide/buddy told me that the ‘pussy market’ is right around the corner and you can get a blow’n’fuck for 100k rupiah.

So with this in mind, first evening I set off in search of the girl market.

Just 30 meters down the street there’s the infamous Lucifer bar about which I had read online, known for hookers.

Outside sat a couple of guys and two extremely hot chicks, so I decided to go inside for a drink.

The place was completely deserted, because of Ramadan – not a single soul.

Still, one of the chicks came to me and took my order, brought me my drink and then just sat at my table. I was thinking ‘oh yes, I get to fuck her? Wow!’.

So she starts talking and we chat about all kinds of shit, I compliment her on her looks, etc.

She pulls out a laptop and starts showing me pictures of her, adds me on Facebook, etc.

Her name is Danny – but she didn’t fuck for cash – or at least not now.

I made a subtle proposition, but then she said she’s working and would rather go to a club with me later.

From what I’ve read, I know these girls usually use you to pay for everything, get you super teased & stuff and then ask for ridiculous amounts of money for a fuck.

I would’ve gone for it, but time is sex – so I’ve decided to continue looking for an Indonesian hooker – fuck all the temples, I’ve had enough.

Jl. Sosrowijayan, Jl. Pasar Kembang and around are completely deserted – no one, no hookers, no pimps, nothing.

Eventu,ally after walking further down, a rather old lady was renting her daughters, hehe. ‘Massage?’

They wouldn’t bargain and they were like 6/10 so I kept walking.

Further down, 6 guys in front of a house.

Their apparent leader, a mean looking guy approached me ‘hey, you want girl?’ ‘sure, how much?’ ‘350k’ Jeeez!

This guy was trying to rip me off – I knew from my guide/buddy the local rate is 100k.

‘Hey man I’m a student here in Yogya, I know the prices, don’t try to rip me off, I’m not a tourist’ ‘350k, no less because Ramadan, nowhere else you can find’ Great.

He wouldn’t have it, so I kept walking and he was right, there were no other places ‘open for business’.

According to the international rules of bargaining, when you turn your back and make your first step towards leaving the seller shouts a lower price – this guy was stone cold!

Apparently, when you get to the Muslim version of hell it can get pretty nasty if you fuck for money during Ramadan, lol.

On Jl. Pasar Kembang there are some old ugly hags every now and then offering ‘massage’ but they’re so ugly I wouldn’t touch them if they paid me.

So disappointed I headed back to the hotel where I met with my guide/buddy.

I told him about my evening and he said he’ll take me and get me a good price.

Hopped on his motorbike and guess what?

He rode us to the exact same place where the pimp was trying to rip me off.

Hmm, so I wouldn’t get to see the girls beforehand, this could be risky maybe I’ll end up with a room full of old hags.

There were about 8 girls out of which two were young but not that pretty, maybe 6.5/10.

For this kind of money I was expecting something nicer and although I would’ve gone Peter North on one of them, I could think of 10 different places where I could spend my hard earned currency, starting with Mickey D’s.

Too bad you can’t stick your dick into a happy meal.

On the third day with Elsa leaving Yogyakarta, I decided to check out the Malioboro Mall.

It was exactly as described – the hottest girls I’ve ever seen.

Ground floor – mobile phone store, about 6 of them, all busy with clients so I kept walking.

I went up to the first floor to the perfume store – 3 stunningly hot girls, no-one inside.

One of them approached me ‘can I help you? Do you want something?’

Wow! She was amazingly incredibly hot, like when you open a magazine and think the girls are photoshopped – something like that.

As luck would have it, I was actually in the need for a specific perfume, Acqua Di Gio, my personal favorite and they had it on sale.

I said ‘yes, I’m interested in this’ and she started to persuade me bla bla bla – I was looking at her hot lips but couldn’t hear a word she was saying, that’s how hot she was.

So I said ‘I’ll buy it if you’ll have a coffee with me after work’ and she smiled so wickedly and replied ‘with you? ok, cash or credit card?’ – he shoots, he scores!

A few hours later I was back at the mall, had a drink with her at the Ibis which is right around the corner – apparently she was a student also and her English was quite good.

You have to be careful at their English knowledge level and adjust your jokes/conversation to it so they can follow.

At one point it’s a sure thing that they won’t follow the entire sentence you’re saying and they’ll grow frustrated, which is natural.

So there are two possible scenarios – they’ll either jump on you and you’ll get a fuck, so she can show you what she’s capable of (fuck your English, I’ll show you!), OR she can put an end to it and blow you away if she feels too frustrated/underestimated.

After the coffee, me and Ayu, the perfume girl, were on her motorbike heading to her place to watch a movie – I think this is the most convenient final pick-up punchline: they all like movies, it’s easy to understand, there’s enough room for interpretation, etc.

I got so hard on the motorbike as I was holding her hips and yeah, working in the perfume shop all day she smelled like a fucking angel dipped in honey.

Halfway into ‘Inception’ and two Bintang beers later, I was in Disneyland!

First, she kissed and licked every inch of my body like she was my gf but she wouldn’t blow me – who cares?

I don’t know if she’s the most beautiful girl I’ve ever did it with, but a definite top 3.

So I uselessly spent 16$ on the hotel room that night since I remained at her place and banged all night.

I licked her beautiful, clean and shaved pussy till’ she couldn’t take any more. At one point she was so wet it felt like I was fucking a bucket.

In the Muslim world generally, men are more religious than women and stick to their religious traditions harder.

You know how in some countries there aren’t any taxes, you can just hop into any car and it’ll drive you for the right price?

That’s what I’ve been hearing about Indonesia when it comes to fucking.

Still, I managed to do it without paying, with an amazing local girl, which was awesome! But it was just about to get better…

I have to say really what you need in Indonesia in order to get laid is balls, nerve, a bit of humor and some good looks.

I admit, I’m a decent looking guy, but I really didn’t expect things to go so smooth.

Reading Exit93’s post at first I said ‘this guy is so full of shit’ – but since the Mall picks were spot-on, I said what the fuck, I’ll try hitting girls on Indonesian dating sites too – only one more day left in Yogyakarta.

Anyway, I sign up and start scrolling for some hot girl.

Remember this place supposedly attracts single women in search of a good fuck for which they pay, like gigolos or male hookers, lol, like Exit93 said.

Nothing happens for the first 5 messages, after which one woman reply and asks to have a conversation.

I shit you not, the conversation was like this ‘where from?’ ‘how old’ ‘I have a flat, 10 minutes drive, want to see?’

Needless to say, my jaw dropped, like I was living a fantasy.

However when things seem too good to be true, they usually are, so I said ‘no money, ok?’ – maybe she was a hooker and I had it all backward.

She just replies: ‘no money, yes’.

I took off for Reddha condo without have all my cash on me, neither my passport, so if she turned out to be part of some organ trafficking gang having just missed a kidney maybe, haha.

Still, the second time was better.

She gave quite a recital on my dick and I fucked her like there was no tomorrow.

No phone numbers, no facebook, no e-mail address – I never got this anywhere.

A few hours later she said she had to go someplace. Maybe I need a lift anywhere.

But I just felt like walking back to the hotel, contemplating like I was walking on clouds – it’s so fucking good to fuck!

However good it gets, remember to always wear a rubber in Asia.

In Indonesia – in Java at least, it’s perfectly normal for everyone to stare at you. You have white skin, regular shaped eyes, you’re different, exotic.

I can’t think of an area in Asia with such good English and social openness.

I tried to tip my local guide/buddy 20k rupiah when I left for his help but he wouldn’t have it.

I thought maybe he would expect some money off me, but they really enjoy helping foreigners out and practicing their English.

So smile, be cocky but respectful, take advantage of this and visit Yogyakarta, you can’t go wrong including it in your itinerary.

For me, it was like taking my dick to Disneyland.

The author of this article: Impara