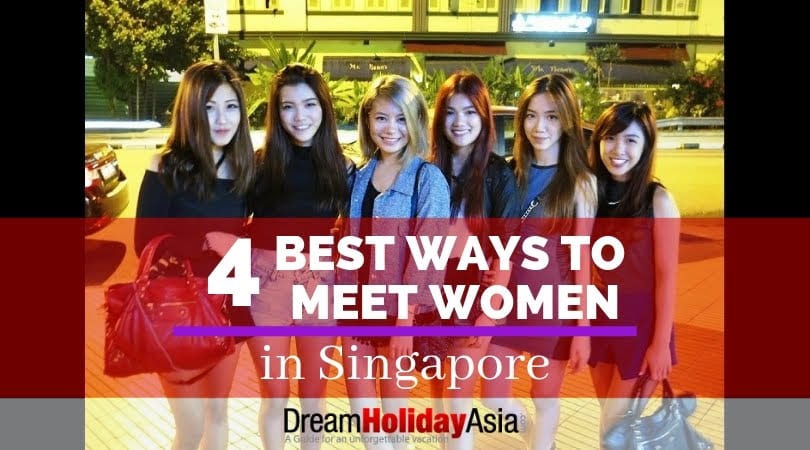 There’s so much accusation against Singaporeans being ‘xenophobic’ on the internet lately, so I thought I write this for the benefit of our foreign talents.

Before we start, let me state 2 things which this article is NOT.

This guide is NOT written for the purpose of picking up local Sarong Party Girls or SPGs.

These women will typically attach themselves to foreign men anyway so you have to be a real dork if you haven’t already scored with one of these party girls.

So no, we are not talking SPGs here.

Also, this guide is NOT written by an expat.

It is written by a local Singaporean regular clubber and social observer who has witnessed how surprisingly readily local (non-SPG) women get hooked up with foreign men.

Every expatriate I’ve met who’s been here for a year or more has had at least one fling with a local gal.

Likewise, most of my local female friends have admitted to at least one romantic hook-up with a foreigner.

Some women reading this will swear they are not “the type” who will date foreigners, but I’ve witnessed many of these “types” eventually hooking up in Singapore, and some even end up tying the knot.

Forget about Singapore’s reputation as being an unhappy nation where people have the least sex.

It is a myth borne out of misguided surveys.

Women in Singapore do love sex, and the best part is – they are often discreet about their exploits.

But this does not warrant an all-out testosterone-driven approach to court them.

That would border on sexual harassment, and it often doesn’t get what you really want.

The key to romancing local women is POLITE FLIRTATION.

And here I must add that it is more advantageous if you are a foreigner and English-speaking.

6 Advantages Foreigners Have Over Local Men

Despite a survey that characterized Singaporeans as most world’s most emotionless people, local women are particularly polite, kind and hospitable towards tourists and expats. This is a huge advantage.

You can use this to ask local women about the most mundane things – food, directions, language, culture, etc.

Local men doing the same thing will get brushed off as a bore.

So after you have gotten the woman’s undivided attention, ask them out and show you around town.

And you’ll be surprised how many will. And there you have it – your first date.

2. You Express Yourselves Better

Singapore is the only Asian country with English as its first language.

Despite that, most local men’s oratory skills are mediocre, so here’s where you can fill the vacuum with women who perk up to hear men speak their mother tongue in confident, unbroken and sexy fluidity.

Hot tip: Speak slower than you would normally do back home, and tone down on the accent.

Also, don’t forget to listen and allow the girl to speak, with your eyes fixated on hers.

Singaporean women grew up on a pop culture diet of Western TV, movies and music.

A little part of them wants to know what it feels like to be romanced by a foreigner.

By the color of your skin, you already arouse curiosity. You can turn that curiosity into attention, interest and a date.

4. Local Women Cut You More Slack For Sleeping Around

Yes, you read it correctly.

The local women accept the stereotype of the promiscuous Western male as intrinsic in your DNA.

If you have been sleeping around with multiple partners, Singaporean women are more likely to overlook your indiscretions than she would with a local man.

5. Local Women Lose Their Sexual Inhibition For You

There is a wild sex kitten hidden in some women, and most will opt to unleash it with the foreigner than with local men.

Perhaps they see you as the embodiment of sexual liberation… Or maybe you are the transient lover whom they trust to keep their wildest sexual desires a secret.

Whatever the case, you’re in for one hell of a wet and wild ride once you snag one.

6. You Offer The Lure Of a Marriage Ticket Out of Singapore

The women will not mention it, but at the back of their minds, they know you offer the possibility of a ticket to live in truly first world countries with a better quality of life.

It may not materialize in the end, but it certainly does not hurt to offer that silent bait in the course of romance.

Look out for groups of girls on their night out, slide up to them on the dancefloor, put your head close to their ears and pay them a compliment.

Sure, it’s corny, but you’d be surprised it works because local guys don’t do enough of that.

Now put your hands on their waists and see the reaction.

If your hands remain there for the next 10 seconds, it is a signal romance may be possible.

This is a tactic not often used but I’ve seen it worked.

Near closing time, head out to the exit lobby and look out for girls, who are already intoxicated, and start a conversation. I

“Hey Celeste, we met inside a while ago. Where are you gals going? Supper? Have you an extra seat in the cab? Do you want to come to my condo and hang out a bit? I’ve got food and wine and a great balcony view of the city.”

3. Approaching Women During The Day

Singapore is not a city where strangers strike up conversations on the fly.

A local guy approaching women in the cafe, mall or on the street would be summarily dismissed as a weirdo, an insurance salesman, or even a sex pervert.

But as a foreigner, you stand a higher chance that the woman will stop and hear you out.

Is the tourist information sound familiar?

You’ve got that precious 30 seconds to ask for her number or give yours. I reckon 2 out of 10 women will reciprocate to a foreigner.

A local guy will probably get zero. Projected conversion rate: 20%

This is an increasingly popular method to meet new women.

The variety is mouth-watering – There are singles, divorcees, bisexuals, women looking for long-term, short term, friendships and even casual sex.

Set up a profile on a popular Singapore dating site and market yourself as an expatriate new in town that wants to know Asian women.

Remember to write a humorous description of yourself; be humble and polite.

Most of all, make the first move.

Send messages to all the ladies who strike your fancy. Not all will reply so cast your net wide.

Finally, I end with the elephant in the room: “What about money? Don’t expats need to be rich to attract local women?”

My honest answer is “wealth is useful, but it’s not essential.”

You don’t need to be an Anton Casey to snag a local pageant queen.

The stereotype of the materialistic Singaporean woman is just that – a stereotype.

What Singaporean women really want is attention and the thrill of hot romance.

So there you have it – the best ways to meet women in Singapore.

If you haven’t scored a date with a local girl within days after trying out those tips, I guarantee you two things:

Hit me up if you want to thank or punch me: [email protected]