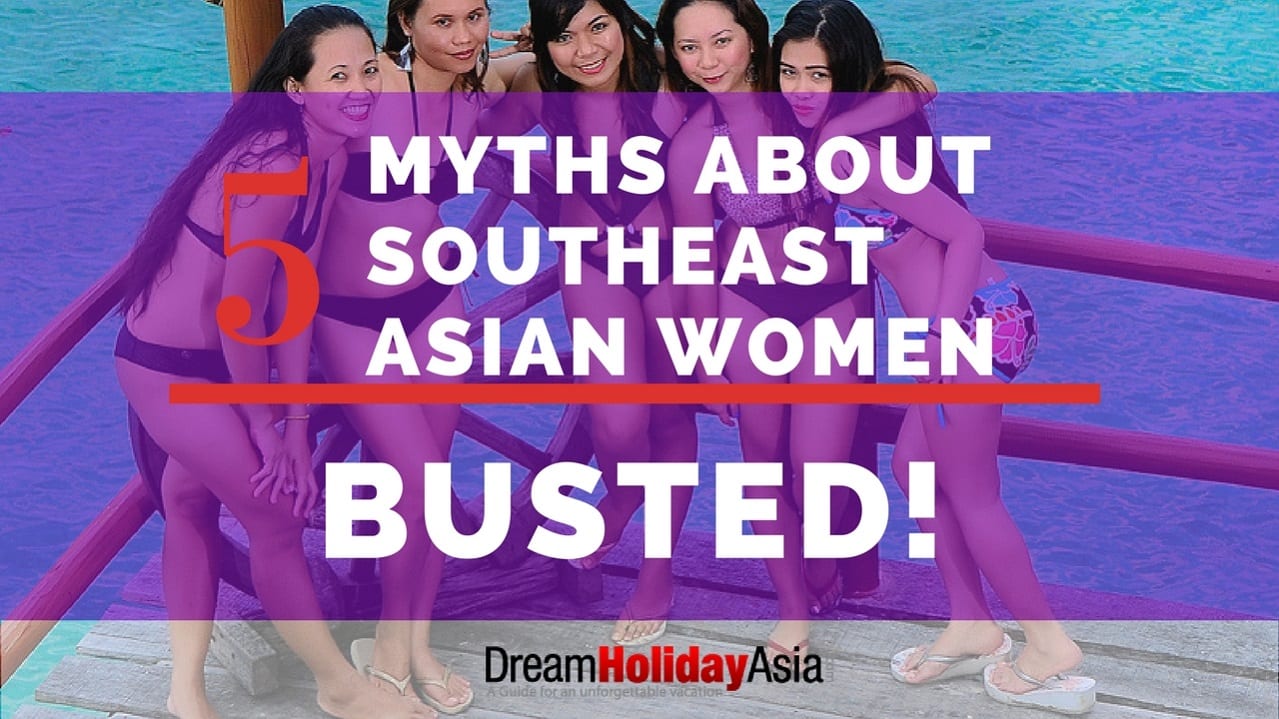 When I tell Westerners who never travel abroad that I mainly date Asian women, I invariably get the look. Women and men alike.

What look is that, you ask?

It’s a look that expresses pity, condescension and even a little anger. It says – “oh, those women just want your money, or a life abroad, or a softer, older man. There’s probably no real connection there.”

To those people, all foreign women are the same. They’re either order brides… Or gold diggers… Or prostitutes incapable of real emotion.

It’s inconceivable South East Asian women could really love a man in a way that he never experienced in his home country.

But my version of the story is that South-East Asian ladies have always made me feel like home in ways that my countrywomen can’t.

I can’t tell if it’s because local cultures emphasize hospitality, because Western men are inherently sexy, or for some other reason.

That’s just how it is – and in this post, I want to share 5 of the most common myths about South East Asian women, and the realities behind them so you can see this new world with your own eyes and feel it with your heart.

Let’s start with the most hurtful stereotype.

People think that most South-East Asian countries are poor. Not anymore like in the 80s.

Today, a majority of the population can afford smartphones and cars. This was unthinkable twenty years ago.

Having said that, a small portion of the population mainly in the countryside still live in poverty.

In fact, you’ll find women ready to do anything to support themselves and their families.

Thousands of them turn to be working girls, mail-order brides or career gold-diggers out of necessity – and end up sucking at their jobs.

Now, these sorts of women represent a tiny fraction of South-East Asian professionals.

Most girls you’ll meet in bars and on the streets love what they do and thoroughly enjoy sex and male company.

Unfortunately, some men are desperate to the point they end up committing to the bad apples who do just want money.

As a result, we get crazy stories, like this one where a man’s mail-order bride turned out to be sending money back home…

The truth is that bad, nasty women exist everywhere. Asia is no exception – and if you don’t trust yourself to steer clear of gold-diggers and manipulative women, your best option may be not to date at all until you figure things out.

A lot of foreigners see how hospitable South-East Asians are, and assume: these people are below us. They enjoy being submissive and can’t be independent or make their own decisions.

To a degree, this is true with S.E. women. They’re raised to let their man feel like a man, and they enjoy giving you hot sex; hot meals; hot baths and showers. In short, they want you to feel like a king.

But what nobody enjoys is being denigrated and disrespected by their romantic partner. S.E. Asian women like foreigners because they’re respectful – and certainly expect you to fulfill certain obligations in return for being a king at home.

The truth is that dating Asian women come with its fair share of rewards – but also responsibilities that would make many Westerners uncomfortable, e.g. being the main breadwinner.

People think they all go to sleep on bamboo mats, eat rice for each meal and barely know how to read.

And sure… there are poor families just like that.

But if you go to Jakarta – a megapolis of 10,000,000+ people – you’ll find a vibrant and international community. In Thailand, you’ll find some of the best healthcare in the world. Manila has over 50 universities.

In other words, these countries are no banana republics – and like any thriving cosmopolitan areas, they have more than their fair share of young, ambitious high-society women. Whether you prefer self-made girls or rich, spoilt daddy’s princesses, you’ll find them – because the truth is that there are low-class and high-class women in S.E. Asia.

Myth #4 – Asian Women Are Below Us

The absolute worst stereotype is that dating an Asian woman is somehow “settling” or “dating down”.

I don’t even know what to say about this one – except that it feels hateful, unfair and all sorts of wrong.

In the end, a person is a person. A man is a man and a woman is a woman.

The truth is that you should be with whoever makes you happy – no matter which nationality.

While nobody’s promising that you’ll find the sex, relationship or marriage you want in Asia, the decent women here certainly deserve a chance – just like decent women everywhere else.

The last stereotype is that Asian women are too shy or self-conscious to initiate sex and get freaky in bed.

It’s almost true in the sense that Asian countries tend to be either Muslim (Pakistan, Indonesia) or Confucianist.

Both traditions are against public displays of affection and sexual interest – so women do act modestly in public.

Behind closed doors, though?

They want to fuck – and they’re into some naughty things that’d make a liberal American chick blush.

Don’t just take my word for it, though. Visit Asia, bang some local chick and experience a different sex life.

See you on the other side, my friend.