You can find Thai freelancers in any popular tourist destination in Thailand like Bangkok, Phuket, Chiang Mai and Pattaya.

Freelancers are Thai girls that sleep with tourist for a fee. Unlike other forms of regulated prostitution, freelancers are their own boss and whatever they get goes into their pocket.

Many tourists perceived freelancers in Thailand as risky business only because they aren’t employed by a bar or work in a sex massage.

It’s common to think that they might have diseases or make problems. But the reality is they don’t like to share their profits with a brothel’s owner.

It’s pretty obvious that to convince a customer to pay 2.000 baht instead of 1.000 baht for the same service takes a lot more work.

That’s the reason why a freelancer prefers to look for customers on her own. As a result, she has more freedom and with less effort, she earns similar money as a bar girl.

The interesting thing is the smartest and hottest Thai girls happen always to be freelancers. The less in demand ladies usually work in beer bars and the agogo girls don’t work there for too long before becoming freelancers.

In this article, I talk about the types of freelancers in Thailand, where to meet them, and how to negotiate rates.

If you can’t bother to go out at night hunting for Thai freelancers in nightclubs and streets, then your best option is to use a dating site.

A dating site might seem the least place to look for a freelancer, but in the popular tourist destinations in Thailand, you can find plenty of them.

They try hard to disguise themself among civilian girls, but it’s obvious by their profile’s photo and description they aren’t your ordinary Thai girl looking for love… 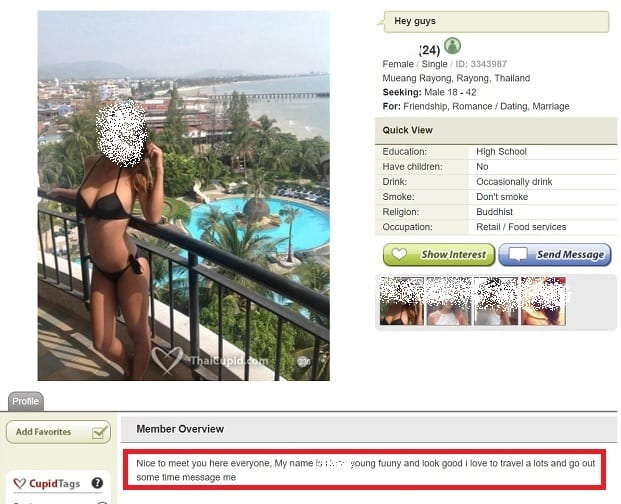 First, they don’t dress up that much. They usually wear bikinis, skirts or revealing clothes. Second, they pose in a sexy way to attract more interest.

Sometimes they also express interest in generous men. The hardcore freelancers even put their Line Id in the profile so the guys can contact them immediately.

The advantage of getting in contact with freelancers online is you don’t have necessarily to be in Thailand to do so.

For example, you can ask a girl to meet you at the airport or directly in your hotel room on the date you plan to arrive. That way you can immediately enjoy the company of a beautiful Thai girl the moment you land in Thailand.

If you would like to get in contact with Thai freelancers online, the safest and most popular sites are Thai Cupid and Thai Friendly.

Both sites have plenty of freelancers, the only difference is Thai Friendly lets you search for ladyboys separately from girls. Meaning there is less gender confusion.

To get started, you simply need an email address or Facebook profile to register. Then upload your photo and write something about yourself.

When contacting freelancers on those sites, be upfront about your intentions and be clear about what you are looking for. It helps to avoid misunderstandings once you meet up with the girls or ladyboys.

For example, if you want a companion for a few days of fun, simply write in your profile that you would like to meet an outgoing girl or ladyboy, and don’t mind being generous for her time.

By doing so, you attract the freelancers and avoid the regular girls looking for a serious relationship.

2. Thai Freelancers On The Street

Nearby any red light area in Thailand, you can find street freelancers.

For example, in Pattaya, you can find freelancers in Walking Street and Beach Road while in Bangkok just walk around Nana.

When a freelancer approach or try to stop you, you can bet she is a transgender. Real Thai girls would never initiate a conversation, even working girls.

Don’t worry, it won’t last long. When there isn’t much to add to the conversation, the girl will ask you if you want her.

In conclusion, picking up a freelancer from the street in Thailand is only a matter to approach her, have some small talks, and make a deal.

One more thing, don’t expect to find street freelancers during the day. They usually come out after 7 pm when it’s dark. And after 10 pm hardly you’ll find any hotties out there.

For late punters, it’s better to visit a nightclub to pick up Thai freelancers.

Wherever you happen to be in Thailand, there are certain nightclubs where you’ll find 90% of the girls be freelancers.

And they are always those nightclubs where foreign guys hang out and taxi drivers insist to take you at night (they get a commission from the club when they bring foreigners).

Unlike the Thai freelancers that you find online and in the streets, nightclub freelancers are all night deals. Meaning you pay them to spend the night with you until midday.

This type of freelancer is only worth the effort if you are a party animal, otherwise it’s a waste of time and money.

Don’t think to walk in a nightclub and walk out one hour later with her for some bedroom activity. That isn’t how works with nightclub freelancers in Thailand.

They hang out with friends and want to have fun drinking, dancing and chatting as you can see in this video…

Who is going to pay for all the drinks on the table? You, my friend.

But there is more… By the time you get back to your room at 6 am when the club closes, there is little energy left for some bedroom activity. And if your girl happens to be too drunk, it’s your bad luck.

In conclusion, nightlife freelancer met in a nightclub are only worth if you enjoy that lifestyle.

Otherwise, you better off save some money and take a freelancer met online for dinner, and have a full night of intense sex.

How To Negotiate Lower Prices With Freelancers In Thailand

By now you should have an idea about the cost of freelancers in Thailand. If not, these are the standard rates across Thailand:

As you can see, prices for Thai freelancers are very similar across different destinations.

The thing is freelancers’ rates are negotiable. Those girls don’t work for a business, so they can decide on their own how much to ask you.

And it’s definitely better to pay a girl 1.000 baht instead of 2.000 baht. What about have her almost for free?

The secret to a better price is rather simple: treat a Thai freelancer like an everyday girl, not a prostitute. By that, I mean to have a pleasant and respectful conversation that makes her feel like a woman.

When you make her feel like a woman, she’ll treat you like a boyfriend rather than a customer. She’ll charge you the minimum rate and sometime she won’t even ask for money.

How to do that?

Start a conversation by introducing yourself, let her know how beautiful she is and that you would love to take her to eat some food together. Now you’re making her feel like a woman.

Instead, the 100s of tourists before you start a conversation by saying “how much?”, and then talk some no sense deal to the girls like in this video…

That’s is the easiest way to make her feel like a prostitute and as such, she’ll charge you the highest rate in the market.

So, the secret is to never talk about money, have a natural conversation like you would with a girlfriend, treat her for a good meal, and go with the flow.

And if in the morning she’ll ask for money, you can bet it’ll be the lowest rate she has ever asked.

Yet, you’ll be surprised to find out that often you’ll not get asked anything more than to meet up again sometime.